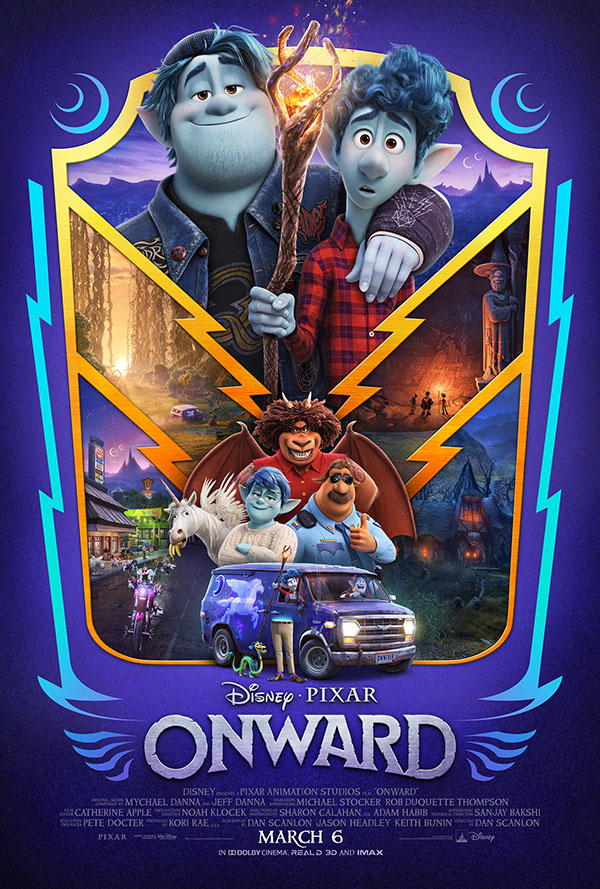 Courtesy of Pixar and Disney.

Disney and Pixar joined forces to create the newest animated childrens’ movie, “Onward,” which hit theaters on Friday, March 6. The film centers around two elf brothers, Ian Lightfoot (Tom Holland) and Barley Lightfoot (Chris Pratt), as they go on a journey to bring their dad back from the dead for a day. The plotline was filled with magic and joy, bringing light to viewers’ hearts.

At the start of “Onward,” Ian falls into the stereotype of an awkward, shy high schooler desperately trying to make friends. As the film progresses, Ian learns of his strengths and becomes confident in himself. Though this is typical of a coming-of-age plot, Ian’s personal journey toward improvement is portrayed beautifully. His conversations with Barley progress from strained and tense to loving and supportive, showing how both characters developed to work well together as a result of their shared adventure.

The plot of the movie was cliché, yet done well. This was made possible by the cheesy humor and intriguing characters keeping the film interesting. The silly moments kept the audience in good spirits for the entire hour and 40 minutes. Moments of tension where the characters’ abilities were put to the test kept viewers on the edge of their seats and invested in the stakes of the movie. The warm, tender moments are where “Onward” truly shines, bringing viewers to tears by pulling at their heartstrings.

The characters’ relationships also saw improvement in strength over the course of the plot. Both of the brothers developed stronger relationships with their mom, Laurel Lightfoot (Julia Louis-Dreyfus), by the end of the movie. The most amazing aspect of the relationships, though, was how the filmmakers were able to establish a strong relationship between Ian, Barley and their dad, Wilden Lightfoot (Kyle Bornheimer). Despite only existing from the waist down, Wilden is able to develop a presence in the movie, providing comic relief and heartfelt moments. Director Dan Scanlon was able to make the audience care about a character without giving him any lines; this is an incredible feat which deserves high praise.

The animation in “Onward” was stunningly smooth, which is expected of Pixar and Disney. The characters, though inhuman, had realistic proportions and were drawn well. This helped keep the audience engaged and made the movie more interesting. The vibrant colors and fluent movements did not disrupt the flow of the film at all, which viewers appreciated.

While “Onward” is strong as a movie itself, it is even stronger in its steps toward supporting the LGBT+ community. This film marks Disney’s first-ever explicitly named LGBT+ character, Officer Spector (Lena Waithe). The character explicitly mentions having a girlfriend in her only scene in the movie. While that small line may seem insignificant, it is a milestone for the community and the companies themselves.

Pixar and Disney found an incredible balance between silly and serious in “Onward.” The movie was able to keep viewers invested in the plot, despite it falling into several coming-of-age clichés. The audience was able to care about the characters and go on the journey with them. This earns “Onward” 4.5 out of 5 stars, with the only improvement available through choosing a more unique plotline.