Review: ‘House of the Dragon’ soars to new heights with well-rounded premiere 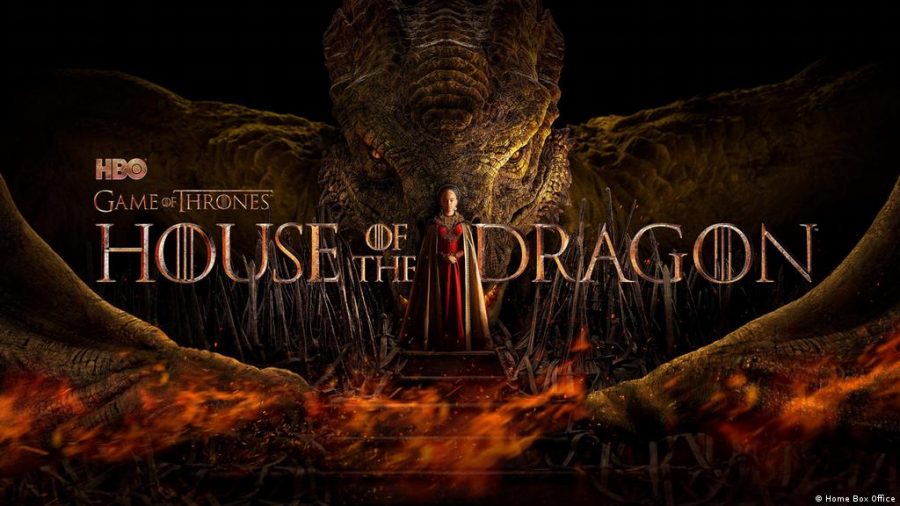 George R.R. Martin’s “House of the Dragon” marks the second series in the “Game of Thrones” universe and the first since “Game of Thrones” ended in 2019. It takes place 200 years before the events in “Game of Thrones” and tells the story of House Targaryen, one of the main houses in the original series. It opens with a short prologue following two candidates, considered to rule the realm, Viserys (Paddy Considine) and Rhaenys (Eve Best). Viserys is selected to be king while Rhaenys narrates from the future and helps set the theme of how the realm would never accept a woman on the iron throne.

The first episode plunges fans of the series back into its gruesome and gritty yet beautiful dragon-filled world with a rollercoaster of emotions. The episode introduces the protagonist of the series, Rhaenyra Targaryen (Milly Alcock), along with a wide range of other pivotal characters such as the main antagonist, Daemon Targaryen (Matt Smith). It uses the ideal of precedent and the theme of breaking tradition to employ a conflict that is well understood and allows viewers to sympathize with both parties. It gives each character enough depth to where they are not all totally good or bad, which reinforces the same ideas of “Game of Thrones” that there are no good guys or bad guys within this universe. All characters’ motivations and actions feel natural and clearly establish their defining characteristics for the coming seasons without making them feel like reused archetypes.

One of the other primary themes found within the premiere is that of the increasing roles of women. The show is grounded and set in a universe that believes women’s only duties are to marry, have children and raise them. The idea of a woman becoming queen and sitting on the throne is reiterated throughout the episode and is tied into changing modern societal standards in such a way that it feels natural and not overbearing. The message feels grounded within the reality of the universe through Viserys selecting Rhaenyra as his heir after coming to a realization about himself and wanting happiness for her. The payoff at the end feels so relieving.

With a new set of characters comes a new set of actors and aside from big names like Matt Smith and Paddy Considine, HBO chose to go with an array of smaller actors like Emma Carey and Steve Toussaint. One might think this is a risky decision for a show of this caliber but boy does it pay off. The acting feels passionate and the dialogue between characters feels natural as they flow from conversation to conversation with old valyrian jokes that’ll have even newcomers to the series snickering. The dialogue does carry a lighter tone which in turn makes it easier to follow, but this might upset die-hard fans of the series as there is less to unpack from each interaction.

Another aspect the premiere handles exceptionally well is that of the fighting and gore. “Game of Thrones” always had a talent to keep viewers on the edge of their seats until the first weapon connects and all hell breaks loose. This is found within the premiere with the jousting match as the tension is raised throughout the tournament until one rider loses his temper and starts a brawl. This brawl leads to the death of multiple champions through brutal skull crushing and back stabbing which is shown masterfully through the cinematography and visual effects. This once again plants the idea in the viewer’s mind that no character is safe in this series and that anyone and everyone could be prone to death in the most brutal ways.

The premiere for “House of the Dragon” is definitely a slow burn but contains everything fans and newcomers of the series would hope to see. It creates multiple separate conflicts and establishes important themes that will be used throughout the series while introducing viewers to a plethora of new likable characters. It contains an ample amount of action and fighting while also making way to showcase the beautiful world they’ve created. The premiere is a fantastic reintroduction to the world fans have missed for years containing themes and concepts one would hope to see, and for that it earns itself a solid 9/10.