Track and field heads to state

After placing top 2 at region, athletes qualify for finals 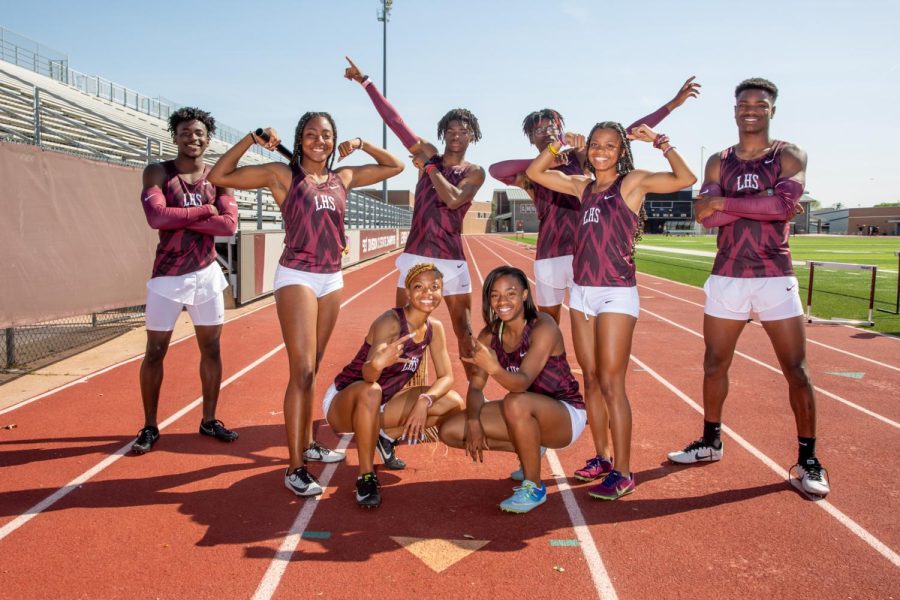 Eight of the 13 track and field athletes heading to the state meet.

Among the competitors, the girls 4×200 relay team that consists of Ryan “Paislie” Allen, Bre’Anna Harlin, Sydnee Wilson, Te’Anna Harlin (Alternates Jaz’Lyn Mims, Keelayna McClendon) finished first at the region meet on April 30. They ran a 1:37:53, beating their personal record of 1:39:13. After not qualifying for state in the 4×100 relay by a .01 second difference between them and Arlington Bowie, junior and second leg Bre’Anna Harlin knew that her team had to work hard to earn a spot in the finals for the 4×200 relay.

“After I ran I was watching really closely, waiting for my team to finish and watching the time as well,” Bre’Anna said. “I was hoping that they would pull through and we did. I saw the time and we were so happy we got first.”

The boys 4×200 relay team, made up of Xavier Lewis, Leon Williams, Caden Jenkins, Cameren Jenkins (Alternates Jordan Johnson, Elijah Walker, Zach Waller), ran a 1:27:25, finishing second at the region meet. While there were some difficulties in the handoffs amongst the boys, track and field coach Heather Moss plans for the team to come in better prepared for state.

“It’s the tiny things of executing your race correctly, each phase of it,” Moss said. “We break it down and we talk about it so that that muscle memory kicks in and you don’t have to think about it, you just do it naturally in races. So that is what we are working on this week and of course with the two relays—handoffs.”

It’s been 11 years since a male athlete has qualified and attended state, and it’s been 15 years since a female athlete has qualified to compete at state for the school. Junior Te’Anna Harlin, who placed second in the 100 meters (11:74), has set goals for herself in her next meet. She is also a nominee for VYPE DFW Public School Girls Track and Field Athlete of the Year. Voting ends May 16.

“I want to win state because I know [the school] has been to state, but it’s been a long time,” Te’Anna said. “I want to get my name in those books.”

After overcoming his injuries throughout his freshman and sophomore season, Lewis plans to give it all he’s got this time around since placing second in the 100 meters (10:67) at region.

“This year, my junior year, it’s my time to shine,” Lewis said. “I just want to improve and show everybody what I can do.”

Through the season’s progression, Moss continued to push her athletes to reach their end-goals. Now getting to compete at the state championship leaves her overjoyed.

“I’m so excited for them,” Moss said. “To see their success and them being celebrated now. All their hard work is paying off and they are bringing recognition to the program and to the school, so it’s great that they all are getting to go and experience this.”