'When people think of Jamaica, some picture the pristine beaches, the all-encompassing natural beauty of the flora, deep-rooted cultural music and the nice people. And while this isn't the wrong viewpoint, it isn't mine.' 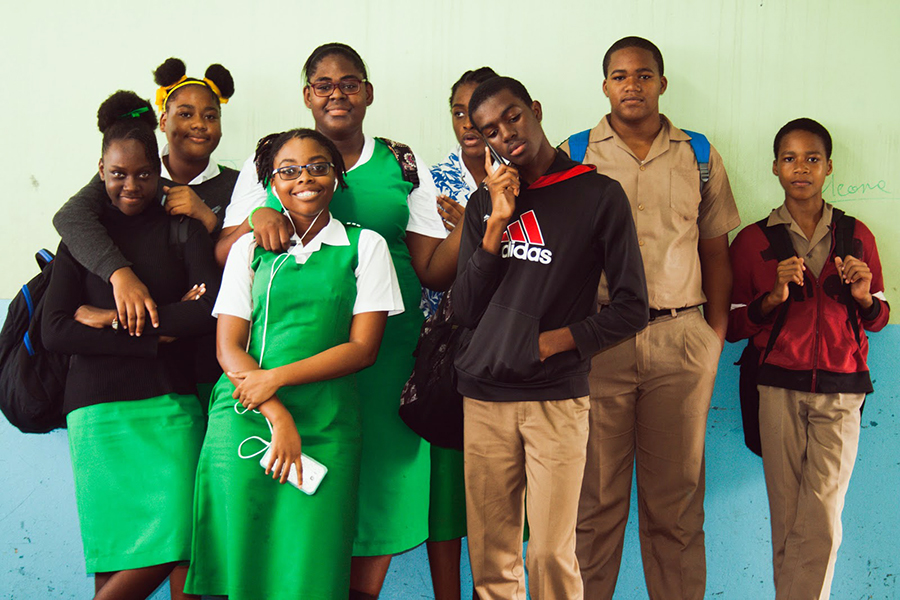 "Having to wear uniforms for more than 10 years has left me questioning my sense of style because we’re able to wear whatever we want here."

Small houses scatter about between tall trees on top of a hill in the parish of St. Mary in Palmetto Grove. It’s where I grew up. Moving to a new home is a pretty life-changing deal, but moving entire countries is even more so. In the middle of 10th grade, I left Jamaica to come to Texas to live with my father. The move had a huge impact on me, and I endured a major cultural shock.

It was all trees and greenery, but I spent all my time in the backyard. Due to how thick and lush valleys were, there was almost never any signal, meaning no internet and horrible TV, with only two channels to watch: TVJ (Television Jamaica) and CVM (“C” – Community Television Systems Limited, “V” – Videomax Limited and “M” – Mediamix Limited). I spent my days with my mom, little brother, step-dad and grandmother, all of us in a mid-sized house.

Upon moving stateside, everything changed. I’d been living in what could only be described as “the middle of the jungle” which was not the best of living situations. It was a dream come true.

Looking back, though, I do miss the liveliness of Jamaica. The community I lived in was relatively small compared to an average American town. There were always people moving about the streets, having loud conversations on the streets in front of their homes, selling stuff, eating and generally living their own loud, chaotic lives.

When people think of Jamaica, some picture the pristine beaches, the all-encompassing natural beauty of the flora, deep-rooted cultural music and the nice people. And while this isn’t the wrong viewpoint, it isn’t mine. The Jamaica I grew up in was full of inconveniences: stupidly unjust and corrupt in its politics. Despite this, there were still plenty of good times on the little island.

In Palmetto Grove, I lived a relatively comfortable life. I had friends and neighbors in the community, and there were times where everyone would come together for a big dance. I later realized not everyone lives comfortably. A majority of people, including my friends, were tight-roping the poverty line.

When I arrived in Texas and had to start going to school, I was pretty confident in my ability to fit in. I knew how to hold a conversation and I knew the types of people I was likely to get along with, but then I realized that wouldn’t be the main issue. I didn’t realize the kids in America were a bit more separated than I was used to. Students have friend groups based on where they live and who share the same interests. It’s difficult to break into a five-year-old clique when you’ve only known these people for 18 weeks.

People come and go in Jamaica, and we see ourselves as a diverse set of people. Known someone for a week, congratulations, a part of the friend group. I found out it was not so easy here in Texas.

I found it funny how in American schools they are less strict. When it comes to respecting teachers, it’s not mandatory to stand when a teacher enters a room. There’s less militant. There’s a general relaxed feeling. Having to wear uniforms for more than 10 years has left me questioning my sense of style because we’re able to wear whatever we want here.

All in all, I’d say this has been an entirely different learning experience for me. I lived in Jamaica for 16 years and I’ve lived in the United States for two. I do think I’m getting better at understanding and picking up on the general social cues of this new environment. I’d say I’m in a better space. I have a good chance of going to a great college where I live. I have now gained friends in my classes and I got my first job. I’m looking forward to seeing how far I can make it in this country and how far this new life of mine can go. Even though I’ll always look back and think “What if I had stayed in Jamaica?” I know now this was a magnificent choice.