Dedicating his life to the game 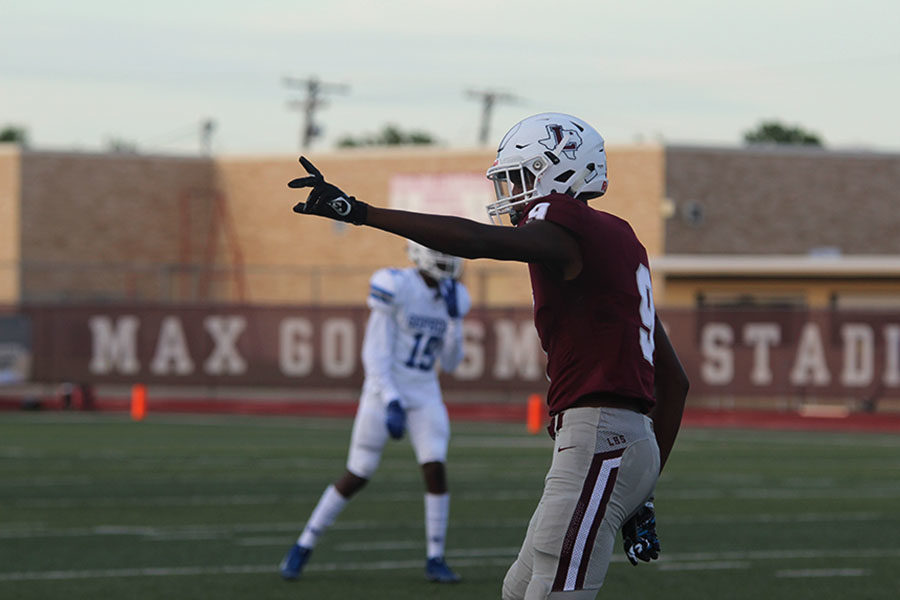 Sophomore wide receiver Armani Winfield (9) raises his hand before the play begins at the home game against Grand Prairie on Friday, Aug. 30.

The sound of people cheering in the stands seems distant. He focuses on the quarterback, waiting for the ball to be thrown his way. The eighth-grade wide receiver watches as the ball leaves the quarterback’s hands; his eyes remain on the ball until it is securely in his hands. He is in his element; being on the field is his favorite place to be. Two years pass and sophomore Armani Winfield (9) is now one of the top wide receivers in the country for the class of 2022 and has received multiple college offers.

“I want to be the best player and teammate I can possibly be and show a great example to others,” Winfield said. “Since last year, I have received a total of 22 athletic offers. I received my first offer in eighth grade from Baylor University and my most recent offer was in June from the University of Texas at Austin.”

Head football coach Michael Odle has watched Winfield grow into one of the outstanding players on the team throughout the last year. However, Odle is not only focused on the athletic aspects; he has also aided Winfield in improving his academic and leadership skills.

“He’s grown up tremendously,” Odle said. “Coming in as a 14-year-old freshman and being asked to play varsity football, that’s a lot to put on somebody. Of course, he has the skills to do that, [he’s a] very talented kid but he has just matured.”

Becoming one of the top wide receivers in the nation has been a huge milestone for Winfield. He never imagined reaching this point and he is overjoyed to be in this position. But it has also put more pressure on him to continue meeting the standard he has set for himself.

“He didn’t become who he is by accident,” Odle said. “Good players don’t bow down to pressure, they step up to it. Pressure is something good players yearn for so I don’t see [Winfield] backing down to any pressures.”

Obtaining this position has not been a simple task. Winfield dedicated a vast amount of time to football, including 18 practices in the spring, practice during the summer and now moving into fall camp.

“I’ve had to make a lot of sacrifices,” Winfield said. “During summer, I had to sacrifice a lot of my time but I don’t regret it because it’s all for me to become a better player.”

Winfield’s friends are proud and supportive of him. Junior Ashley Ehirindu has known Winfield since he was in sixth grade, before he began playing football. She has seen him improve significantly each year and has been there to support him during his games.

“His future has great things in store for him,” Ehirindu said. “He’s a very motivated person and I’m happy he’s where he’s at. He is very blessed and I hope he carries his success through others.”

Recruiters are interested in Winfield because of his characteristics, including his young age, above-average speed and ball skills. Winfield plans to continue his football career after high school by playing in college. Although he still has a couple of years to solidify his decision on where to play, one university has earned his interest.

“I see football [being] an important part of my future,” Winfield said. “After high school, I would like to play at Baylor University because I really love the Baylor coaches and they treat me like family.”

Winfield is committed to putting in the work to improve his athletic skills. He is focused on becoming the best player he can be and helping the important people in his life because they are the ones who have helped him reach his goals.

“So much time and hard work has gotten me to where I am now,” Winfield said. “I don’t have as much free time as some of my other friends and there’s times where I miss out on something important, but it’s all been worth it for the sport I love.”