Footworking toward a better tomorrow 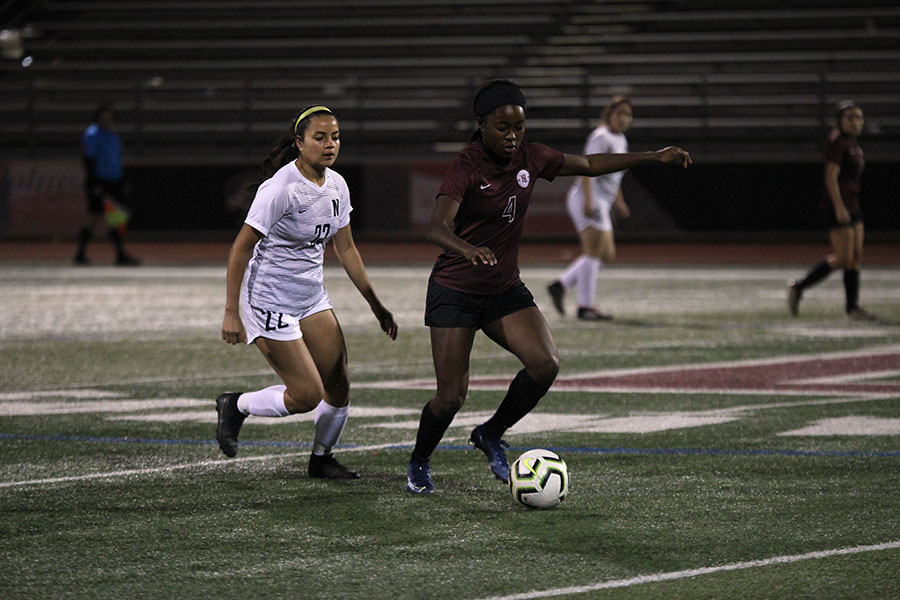 Junior Halana Stroud (4) runs after stealing the ball from the Nimitz player during the home game on Friday, March 6.

With a record of [10-10-3], the girls’ soccer team still has hope to rise in the rankings and secure a spot in playoffs. Since they have faced top-ranked teams, the players have been satisfied with the games’ outcomes. Considering their improvement, they still hope to grow in upcoming games.

“We are definitely making big strides in the right direction,” girls’ soccer coach Jason Gaglione said. “We have doubled our wins since last season and have been toe to toe with top-ranked teams in the nation. Our goal continues to be better than we were yesterday [and] to continue doing the small things right every day both on and off the field.”

The players make sure they focus on their personal and group goals to achieve them. Although sometimes the players need a break, they continue to push themselves to give it their all and keep succeeding. The players have become closer this season and have each other’s backs. Even when a player is having a bad game, the team comes together to cheer them up.

“Our team is doing really well,” senior girls’ soccer captain Krisalin Salgado said. “We have really good players, we act very well and have good chemistry. We do everything possible to ensure we meet our goals and exceed them. Sometimes we want to take a break but we know we can’t stop because we’re doing this good now.”

Even with troubles this season, they’ve managed to only have three losses out of 23 games. The girls’ next game is an away game against Hebron on Tuesday, March 10 at 7:30 p.m. The team is content with the progress made. As they hope to get into playoffs, the team plans to give its best in every game and work as a family.

“You can see it in the results,” Sibounheuang said. “We’re a team, it’s not just one player that’s a superstar. We’ve all worked hard as a team to be cohesive and work well together. I’m very proud of the progress we’ve made as a team.”