Trinity Trotter represents girls’ varsity cross country on her own 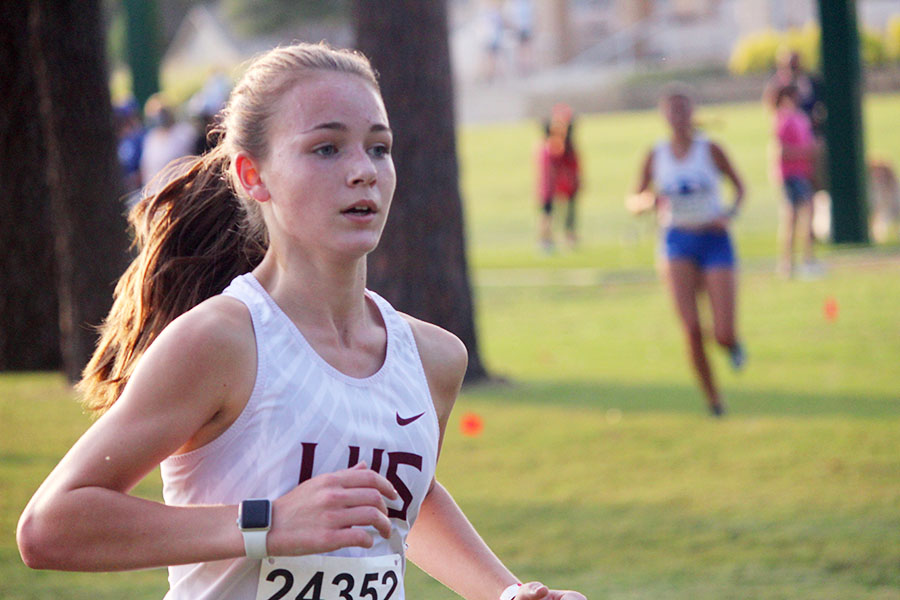 Sophomore girls' varsity runner Trinity Trotter races to catch up with first place at the Marcus Invitational on Friday, Sept. 18. Trotter won the varsity girls’ division with a time of 11:31.86.

The cool morning breeze flew past her red face that radiated warmth. She felt her muscles strain as she stretched her sore limbs to prepare for the moments to come. Her eyes wandered to her left and right, noticing all the colors that adorned her competition’s uniform. She glanced down at her own lonely maroon colors, her fear kicking in as she waited for the race to start. The pressure of girls’ varsity weighed heavy on her shoulders, but she was shaken out of her nerves when she heard yelling echo her way. She crouched and readied herself for the upcoming adrenaline, and with the blaring ring of the horn, sophomore Trinity Trotter raced off.

It all started in eighth grade when she first started running track and cross country. She followed her family’s footsteps and found a way to fit the sport into her already busy schedule. However, it wasn’t done with ease, as people all around her discouraged her at every turn.

“My sister used to run cross country [and so did my mom],” Trotter said. “Then I was told I wasn’t going to be able to run. [My coaches] were like ‘Oh, you’re not built for it’ so I started for my pride.”

Despite the lack of encouragement, she continued on her path of sports. During her freshman year, she balanced volleyball and track at the same time. But when COVID struck in March, her track season was cut short. She had to maintain her workouts and training at home in hopes that life would go back to normal in the fall.

“Well, we lost our track season last year,” Trotter said. “So it was hard working out over the summer because I couldn’t run with people. As a team, we had to work a little harder to be together.”

Even through all the challenges, Trotter continued to dedicate herself to her athletic endeavors. She ran outside of school and when school went back in session, both her coach and teammates noticed her improvement. She stood out in the midst of her other teammates and advanced to varsity in her sophomore year, even though none of her teammates could move forward with her.

“Trinity is the model student-athlete,” head cross country and track coach Heather Moss said. “She works hard and is focused both on her academics and athletics. She also volunteers at each middle school cross country meet we host. Trinity has the desire and ability to run in college. She is a solid student-athlete both in the classroom and on the track/cross country course.”

A challenge that comes along with being a part of a one-man team is having nobody to communicate and improve with. The coach’s solution was to put her in practice with the varsity boys. Although Trotter was apprehensive at first, she gave it a try and saw growth in her skill. She was forced to constantly be at her best to keep up and noticed the reward of it during the meets. Both the varsity boys and her classmates were extremely supportive. She finally felt like she was a part of a team she could grow and bond with, even if she didn’t run alongside them.

“Her work ethic is amazing,” senior Jose Rodriguez said. “She’s a really great student, so being a part of the cross country team this year and seeing her [improve] these last few years has been amazing. We’ve seen her grow up in the sport and she’s learning. [We will support] her since she has nobody else to push her.”

Through all the challenges with the pandemic, it’s expected for students to become discouraged, especially with athletes or band members who have multiple commitments and extracurriculars. The stress they endure can get suffocating. So as the top male in boys’ varsity, Rodriguez feels the need to set an example with Trotter for the other teammates.

“I [try to] show together we can do anything,” Rodriguez said. “We try to find the motivation between each other and help each other out [with finding] our weaknesses and strengths.”

Trotter’s responsibilities pile on top of each other as the pressure of having to carry a whole division on her own while maintaining her other classes takes over her mind. She’s seen the difficulties of being bombarded with responsibilities, but with a hopeful outlook to the future, she finds herself continuing forward.

“The hardest thing about this semester is the lack of motivation,” Trotter said. “There is so much work involving school and cross country, I start to get stressed. I get through it because for both academics and sports, I know whatever I put in now will be what I get in the future. The fact that I am paving the path for my future is a huge motivator for me. From cross country, I have learned how to work with a team and give my best effort because as I said before, the work and time you put in is what determines how you improve further on.”