Hooping through the season 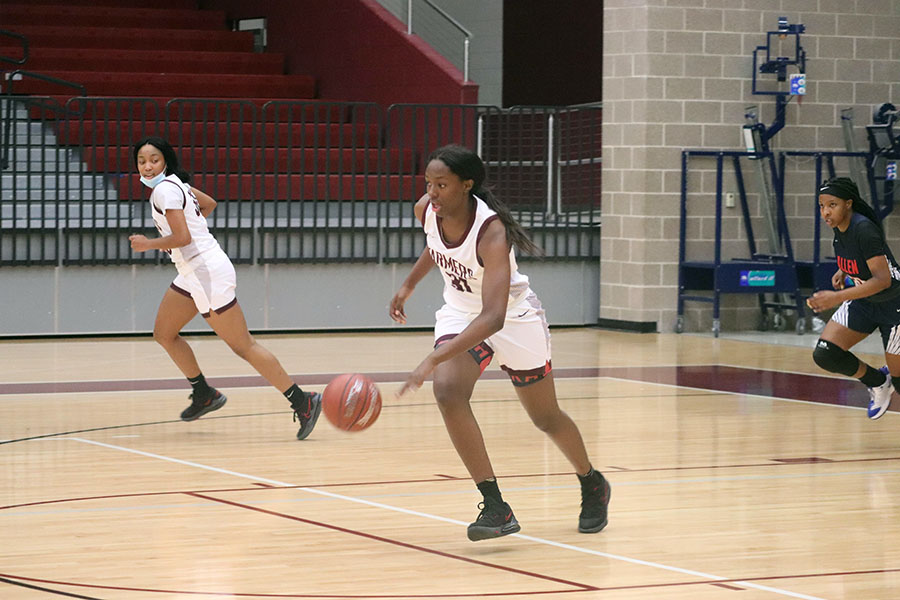 As she looks around to pass the ball, senior Laila Lawerence runs the ball alongside senior Haley Allen during the game against Allen High School on Friday, Nov. 6.

Starting the season with a record of [7-5] and a district record of [2-1], the girls’ basketball team strives to make it far as they can in district despite COVID-19.

The players strive to give it their all on the court and make an effort to not shut themselves down mid-game just because they may be behind.

“Some struggles I encounter are not trying when we’re losing and being hard on myself,” senior point guard Laila Lawrence (31) said. “I know I can accomplish simple tasks, but when it’s not going my way I tend to shut down.”

Although this school year has its challenges, head coach Sally Allsbrook has improvised and worked around the conflicts. From injuries to quarantines, Allsbrook has to constantly be aware and adjust her plays accordingly.

“Games and practices are more come and go vs. getting to really see [the players] around the hallways and look in on them with their friends outside of basketball,” Allsbrook said. “It’s gotten a little less personable and I hate that.”

The negativity and misfortunes don’t stop senior shooting guard Haley Allen (30) from enjoying her last year of high school basketball. As she’s on the court, she’s able to focus on playing, zoning out everything else.

“We’ve come a long way and I’m only hoping it gets better from here,” Allen said. “I would like for us to improve on not giving up [even] when the game isn’t going how we planned on it.”

As a team, they aspire to continue to work hard even through tough times. But with more wins than losses, the girls prepare for their next game against Plano Senior High School on Friday, Dec. 18 at 7 p.m.

“I love my second family, just being around those who love the game as much as I do feels pretty good,” Lawrence said. “I wouldn’t trade my teammates for anything in this world.”