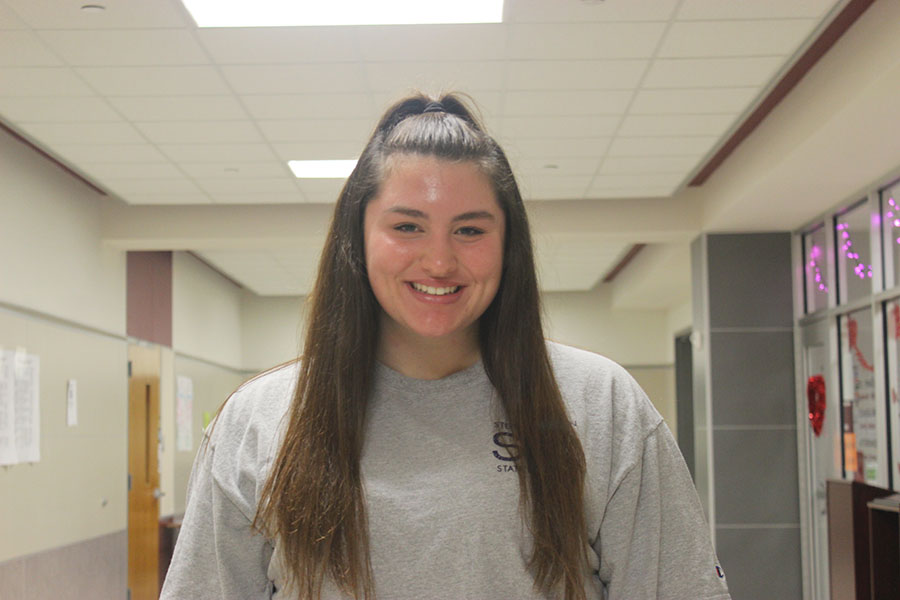 “If you would’ve told me my freshman year that I [would be] an all-stater, I probably would’ve told you that you’re crazy. It’s a really big accomplishment and I’m really proud of myself for pushing through, working hard and accomplishing this goal I wanted.”

Q: What does being a state qualifier mean to you?

A: “If you would’ve told me my freshman year that I [would be] an all-stater, I probably would’ve told you that you’re crazy. It’s a really big accomplishment and I’m proud of myself for pushing through, working hard and accomplishing this goal I wanted.”

Q: How long did you have to prepare for state?

Q: Do you remember the exact moment you found out you made it? How did you feel?

A: “I was kind of shocked. Brianna was right in front of me and everyone was crowding the window because that’s where they post it. All I could see was the outline of my last name and Brianna’s last name right under me so we kind of turned to each other and we were like ‘Oh my god.’ It was really shocking. I was genuinely just like ‘Woah, that’s my name.’ I didn’t think it was my best run, so I wasn’t expecting to come out where I did.”

Q: What was the biggest challenge in preparing for this audition?

A: “Probably not peaking too early, if that makes sense. You work on these etudes for so long that at one point there’s only so much you can do. Of course you can go faster and you can always make it cleaner, but at a certain point, it’s just like ‘I’m so tired of playing these etudes.’ I would say consistency and practicing was probably one of the biggest things for me because I wanted to do the best I could, but it was hard to play the same cuts over and over again.”

Q: Have you qualified before? If not, what do you think helped you qualify this time around?

A: “I didn’t qualify last year. I think my experience last year being so close to qualifying helped me push farther this year. Last year, I feel like I peaked too early, I practiced [too much]. I also wasn’t getting feedback from the directors and my lesson teacher, especially over Christmas break. You have Christmas break, then a week, and then your audition. It was really hard to go a full two weeks without any feedback. You’re just listening to yourself. It’s pretty hard cause you know the music inside and out, [but] you need another ear, you need feedback from another person to help you get to where you need to be. I think that’s what really helped me get to where I [am] this year. I made sure I was scheduling lessons and times to work with the directors and such.”

A: “Whenever I practice, I like to have a specific warm-up routine. I do long tones, then scales and then I focus on my tone. If I jump straight into music, I’m all over the place so I have to make sure I get a good quality warm-up. Before auditions, I try to focus on my breathing [because] for me, that’s the first thing that goes whenever I’m nervous. Also, just not thinking about what I’m about to do, if that makes sense. Of course I’m focused, but sitting there in the chair dwelling on ‘Oh my god, am I gonna mess this up? What’s gonna happen?’ That makes you even more nervous. I try to keep my focus somewhere else until I’m in the chair ready to play.”

Q: Besides band, what else are you involved in? How did you balance your schedule to ensure that you had enough practice time?

A: “Well, I’m in NHS so I do some service hours, but something that took up a lot of my time was working. It was hard, especially during marching season, I would end rehearsal at 6:30, get back to the band hall at 7 and have to work at 8. I’d have to go home, shower, eat dinner and then rush to work. I’d work until 10, sometimes 11. Then I’d go home and do it all over again. It was hard to find time to practice, but [work] was the main thing.”

Q: What advice do you have in terms of dealing with nerves during auditions?

A: “Keep your breathing steady. I start to shake a lot when I’m nervous, so breathing really helps you calm down. I try to draw in the room, like bring a coloring book or a pen and a pencil and doodle. It doesn’t really work sometimes because you’re sitting there and hearing all these people and you’re like ‘Wow, that was really good.’ I’d say breathing is something that really helps me.”

Q: How do you stay patient while preparing for auditions?

A: “A lot of feedback, constantly improving something. Sometimes when you need to take a step back from the music, you can take breaks. If I didn’t take breaks, I probably would not have made state. I can’t keep playing the same thing over and over for seven months straight. Sometimes, when I [got] frustrated, I would go into band music, our Christmas concert music or maybe my solo; just something I enjoyed playing. It gets really hard to sit there and be frustrated.”

Q: What do you hope to gain from this experience?

A: “I hope to grow as a musician. I feel like this year I’ve taken music a lot more seriously than I have in the past, so I really wanna soak up as much information as I can.”

Q: Do you feel that this experience is life changing in any way? Why or why not?

Q: What advice do you have for people hoping to make state in the future?

A: “I would just say keep working and don’t give up. I feel like you sound better than you think you do. The work you put in is going to pay off.”